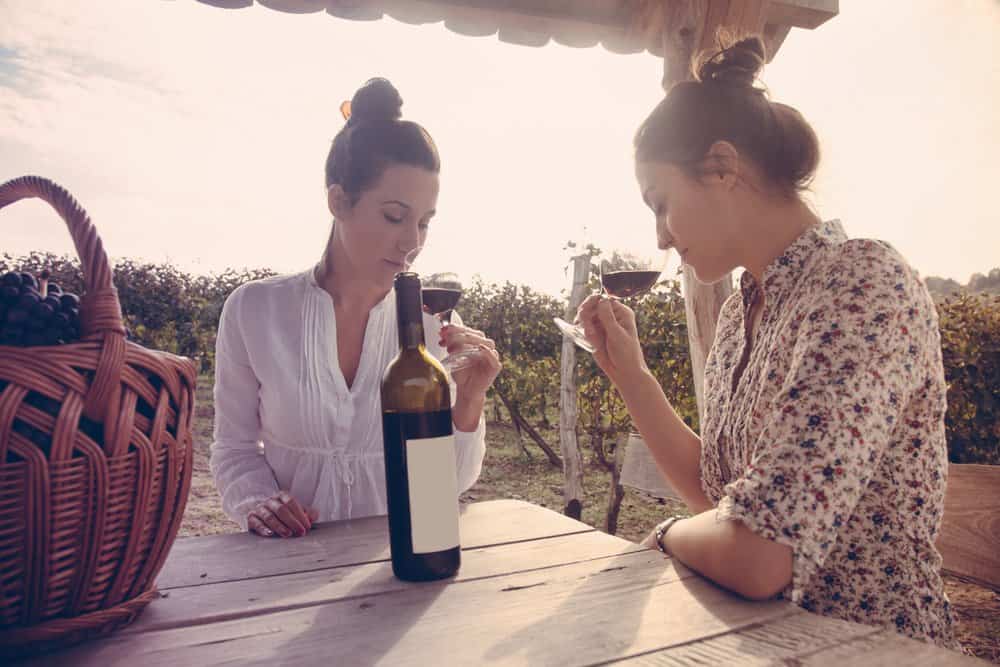 Cabernet Sauvignon is one of the most famous wines – and it’s even considered to be the king. This red wine is suitable for beginners as well as veteran wine drinkers due to its extraordinary flavors and notes. Its fruity cherry and blackberry aromas make it a perfect choice for casual drinking as well as for various food pairings. However, it’s also important to determine whether it’s a sweet or dry wine.

Is Cabernet Sauvignon Dry or Sweet? To put it simply, the majority of the Cabernet Sauvignon wines are dry. They have a high tannin content and low acidity, which often leaves us with that common dry mouth feeling. What’s more, it’s one of the driest red wines out there, next to Malbec and Merlot.

As a result, it’s perfect for everyone who doesn’t like overly strong or sweet wines. In addition to that, Cabernet Sauvignon is made of traditionally sweet grapes, which – paired with high tannin levels – give it the dry yet pleasant flavor.

However, just like with any type of wine, there is a lot more to know about this delicious classic. From various types of this wine to foods that it pairs well with, this wine is incredibly versatile.

Cabernet Sauvignon has many flavors, some of which include black pepper, violet, cinnamon, eucalyptus, and anise. In addition to these herbs and spices, its tannins are bold and taste of cedar and tobacco – all of which give it a slightly woody aftertaste.

Similarly, this wine has concentrated notes of milk chocolate, vanilla and smoke due to its aging process and the specific types of barrels that it’s aged in.

When it comes to the fruits, it has nuanced flavors of plum, blackberry, black cherry as well as currant – making it a relatively dark wine.

What wine is similar to Cabernet Sauvignon?

As you may know, many wines are on the same dryness spectrum as Cabernet Sauvignon. One of the most popular alternatives to this wine is Merlot. Even though this particular wine is less dry, it’s still as round and dark-berried as Cabernet Sauvignon. It has a similar alcohol content (ranging at 13.5%) and is grown in the same regions. What’s more, it’s also made from smaller grapes, which make its color darker and more intense.

Another alternative is Malbec-Cabernet from Argentina. It’s a relatively strong wine that satisfies your palate within seconds of tasting – leaving a tannin-full aroma behind. It’s made by adding splashes of Cabernet Sauvignon, which guarantees the similarity between these two wines. As a result, it’s a great and inexpensive alternative to the traditional Cabernet Sauvignon.

What foods does Cabernet Sauvignon pair well with?

Cabernet Sauvignon pairs well with almost all red meats, including ribs, strips, steaks and filet mignon. It also goes well with lamb or beef due to its high-tannin profile that helps you taste the meat. It can also be enjoyed with cheese platters and olives as well as with many appetizers.

However, it’s best not to drink Cabernet Sauvignon while consuming pasta since it’s full of starch and won’t ease the tannins in the wine, which can alter the flavors.

Why does Cabernet Sauvignon taste so good?

This type of wine is very popular and offered almost everywhere mostly because so many people love it. The reason behind it is that Cabernet Sauvignon tends to linger on your palate for a longer time. This helps you taste different wine components within the wine as well as increases the intensity of the next sip. It’s also dry, which makes it a nice drink for every occasion as it doesn’t overpower you with its sweetness.

How to serve Cabernet Sauvignon?

The best way to serve this wine is to open it one to three hours prior to drinking. This allows all the flavors to accumulate due to the oxygen “opening up the aromas” and gives you the best taste. What’s more, this wine should be served at room temperature or a little chilled.

In addition to that, Cabernet Sauvignon is best served in a large glass since more oxygen will enter the wine and all the flavors and aromas will develop.

Is Cabernet Sauvignon good for cooking?

Out of all red wines available, Cabernet Sauvignon is not suitable for cooking. This hearty wine is aged in oak barrels, which adds such flavors to the food that’s being prepared with it and does not compliment the aromas. What’s more, it will overshadow other notes of your sauce or meat due to its high tannin contents.

As a result, when a recipe calls for red wine, it’s best to use wines that are not aged in oak, such as Pinot Noir, red Zinfandel, or Sangiovese.

Does Cabernet Sauvignon have any health benefits?

It has been proven than there is a beneficial relationship between resveratrol, a compound found in Cabernet Sauvignon, and the reduction of the risk factors that cause Alzheimer’s disease. Having an occasional glass of this wine has shown to reduce the levels of brain-attacking peptides, which cause this illness. What’s interesting, the same health benefits apply to the non-alcoholic versions of Cabernet Sauvignon.

What types of Cabernet Sauvignon are there?

Cabernet Sauvignon is an individual wine on its own. It doesn’t have any other types other than similar wines made from the same grapes.

One of such wines is Cabernet Sauvignon Blanc, which is made from the same type of grapes. This is a white wine that is produced all over the world, particularly in New Zealand, California, and parts of France. It can be consumed on its own as well as paired with a variety of desserts.

Another white Sauvignon grape is Sauvignon vert. Historically, this grape has been often confused for Sauvignon Blanc even though it’s a completely differently tasting variety. This type of wine is more acidic than its counterparts and has notes of ripe fruit like gooseberries and black currant. What’s more, it’s also a more aromatic wine and has a high alcohol content – often reaching 14.5%.

What are the best Cabernet Sauvignon wine brands?

Is Cabernet Sauvignon sweeter than Malbec?

Cabernet Sauvignon has a distinctive and consistent taste, whereas Malbec’s notes vary significantly depending on the region that the grapes have been planted. As a result, Malbec is a drier wine than Cabernet Sauvignon. Even though it’s drier, it pairs with more foods as opposed to its Argentinian cousin.

Additionally, due to the dryness of both wines, they are relatively full-bodied – with Cabernet Sauvignon being less so.

These two wines are made from the same type of grapes. As a result, they are both dry and do not differ when it comes to the sweetness level. The only difference between these two is the notes that they have – Cabernet Sauvignon being more dark-berries whereas Sauvignon Blanc is fruitier, with apple and lemon aromas.

This question is often asked by many avid wine drinkers. Even though wine must be aged, it can break down – and in most cases, it definitely will with time. Red wines, especially Cabernet Sauvignon can be consumed even after two to three years after the expiration date. This time, however, it decreased if the wine was kept in too high or low temperature.

Storing wine is immensely important not only for health reasons but also to ensure that no flavors and aromas are lost. Most red wines should be kept at room temperature, preferably in a dark space with no humidity.